a hell of a combination at port weld

The streets were chocked with purposeful people . To the uninitiated , it does look like a Happy Carnival with posters and banners hanging everywhere and exceptional energetic crowds at the eating places ( ...we should know ! ) . 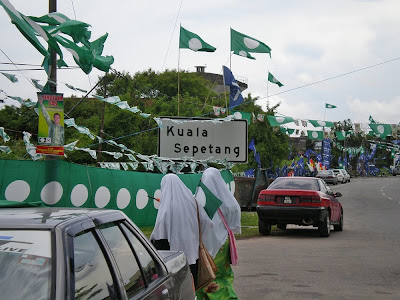 We were particularly interested in the fishing village of Kuala Sepetang , previously Port Weld, the epicenter of the Battle for Bulit Gantang with a crucial Chinese population which could tip the result of the Great Battle either way.

About 2 km before this fishing village , there are many famous Malay "mee udang" restaurants/stalls, all located on the left side ( funny ! ) of the road... 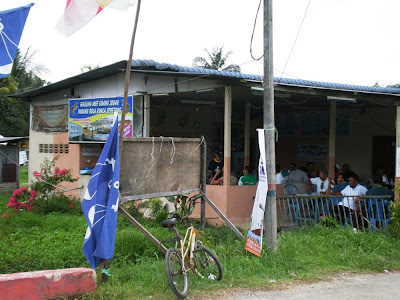 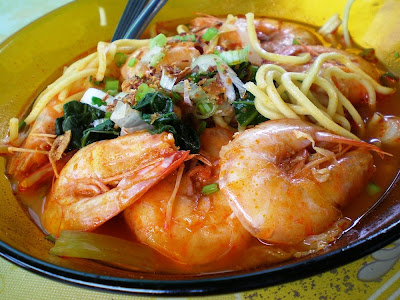 We were "accepted" into one of the super crowded hyperactive restaurants filled to the brim with the fierce warriors and had a first hand look at the famed dish...the standard version of (why?) 7 prawns ( size of middle finger , how convenient ) sitting on top of a mee rebus type of noodle. RM9 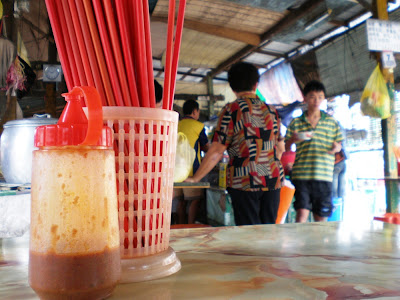 Then we checked out the Chinaman market place in town just down da road at the backstreets for another prawny (curry) noodle dish , this time with 10 tiny prawns plus some baby cockles. RM2.20 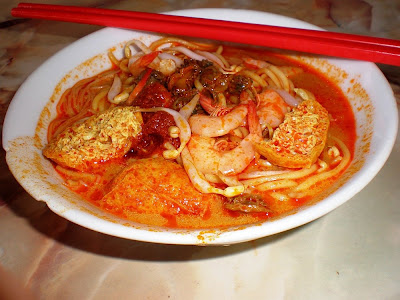 What a marvellous harmonious combination of Malay & Chinese Cuisine, exactly the killer recipe to deal the Barisan National (BN) a crippling death blow on 7 th April 2009 , and send Wira Nizar to Parliament for the first time, to continue the greater Perak War , part Final...soon

HairyBerry said…
we sure love prawns size of a middle finger than a thumb for it is definitely the winner! and the curry laksa at 2.20 definitely beats 2020.

minchow said…
2 Bukits trumps 1 lone Batang anyday! I would like both versions of these special pint-sized prawns, back to back, to celebrate!
April 08, 2009 10:47 AM

backStreetGluttons said…
nic
Perak is now poised for round final -state wide early general election !
If that is the case we should try to FoodBlog round Perak and ensure one of us gets elected to the Royal Food Council Ok ? yes ?

worldW
infact there is another version that costs RM12 , cheap when compared to Penang Teluk Kumbar's super version at RM16 !

550
promise to be there when the next grand Perak election takes place ok !

nGomand
This place is a State treasure so yes , you may have them all !

christy
the chinaman one is also pretty tasty and cheap so you can have 3 at one go ! Thxs for the compliments on the writing. In practise we do better...LOL !
April 08, 2009 5:39 PM

Michelle said…
you can always link me with prawns.. my loves. why am i never accepted by those middle finger size prawns!!!
Gggrrr
April 10, 2009 11:33 PM

backStreetGluttons said…
cumiciki
its fantastic ! can pop in in 3 secs !