March 08, 2009
Former tin mining jewel Tronoh ( Teronoh ) , sliced in the middle by a new Highway was destined for oblivion until it was saved from certain death by UT Petronas & UT Mara , 2 distinguished institutions of Higher Education...
... as they dropped from the heavens into the mega pot-holed mining wasteland ( sometime in the 1990s) ...

...bringing along hordes of government sponsored innocent greenhorns ( future Hope of the Nation ) & the usual cohorts ...twitching the pki ( per kapita income ) of dying Perak ( & Ipoh ) by a few notches upwards . Or something like that.

And some other monuments , like this was also erected 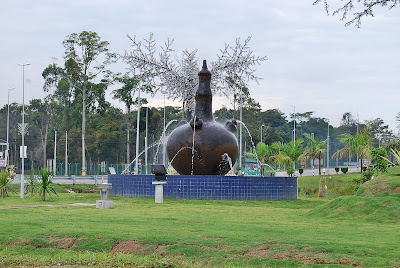 we know ...its leaking all over 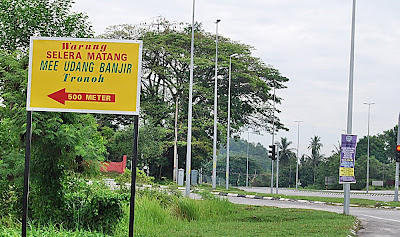 But thank god , we still have one or 2 nostalgic directions to our love 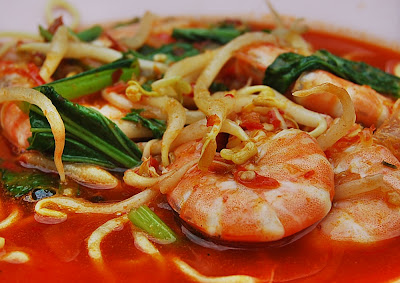 and topped to cholesterolled passion with the freshest succulent prawns
( caught from the usually occuring flash floods ah ? )

if you like the Penang Sg Dua version , you will love this
just as good but only half the price ! 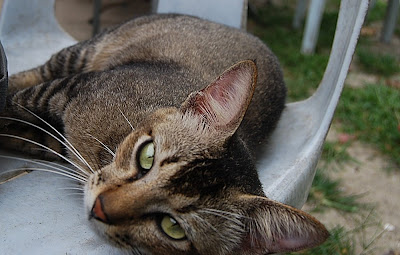 sexy is keeping an eye on us again...
V love da kampung pussy
dun U ?

sc said…
have not even tried the (in)famous Sg Dua mee udang. but this one looks scrumptious nonetheless..i see you really love kampung pussy eh? hehehe
March 10, 2009 10:17 AM

minchow said…
5 prawns mean its hit my cholesterol quota five times over. But wait! I have just heard this gem of a health tip - eat the prawns WITH the shells and it cancels out all cholesterol jitters! Hurray!
March 10, 2009 2:22 PM

worldwindows said…
With UTAR in Kampar it will augurs well for the economy so that less people has to 'jumped out of the plane' and wash 'big plates'.
March 10, 2009 3:18 PM

backStreetGluttons said…
sc
Ya , its pure and unspoilt
haHa

cumiciki
its sweet and little spicy with heavy color. A little like mee rebus same color. Only good thing is the fresh prawns

worldw
but small town people can eat Big Fat good prawns and then lepak with tv 6.5