March 07, 2009
Batu Gajah , Perak is a small town and was once a very rich place with abundant tin ore ( bijeh timah ) all over the place. Those early days Malaya was under the British Empire and huge tin dredging machines & Chinamen were brought in to make holes in the ground to extract the silvery precious metal.

Many English & Scottish business people ( also got socialites perhaps ) were busy working too in the jungles and probably one lonely night , one 2 many single malt Chivas/Macallan plus some had many of them stoned while the elephants were crossing , in a cloud of silvery dust.

Even more amazing , one maddog Scottish ( sorry not Englishman ) together with an army of local Indian craftsmen tried to build a colossal 6 storey mansion complete with maybe 20 giant rooms , wine & scotch cellars , hidden underground passages , and a horse barn , just like a replica of some Scottish Castle near freezing Saint Andrews ( home of golf ), Scotland.

You can see his unfinished handiwork ( now called Kellies Castle near the river bank as you approach Batu Gajah from Kuala Lumpur ), now a glowing pride of the mis-place .

Of course you should also drive around the town to see all the big holes now become Big Ponds and infact the nearby widely acclaimed Clearwater Golf Course is surrounded by many picturesque low index water hazards and lakes ( see romantic chair for 2 below ? )

Introducing the lovely team of the best mee rebus RM3.50
( 40 years old ) in town , near the Indian Temple
just outside the town centre along the
Batu Gajah-Ipoh road ( beside Caltex Station ).

Words cannot describe how happy they were to see team BSG(Perak) , at last ! 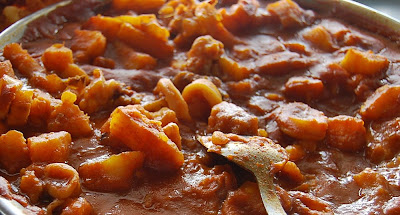 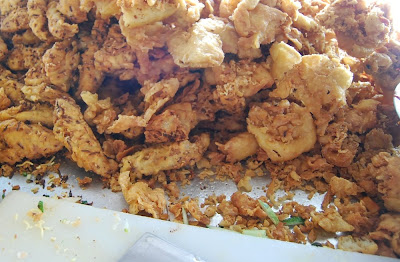 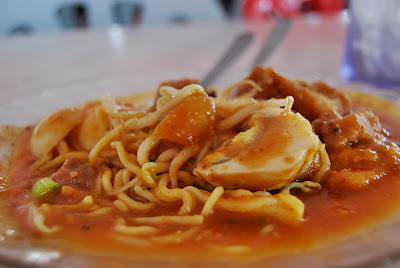 J2Kfm said…
you ordered the sambal sotong with the mee??!

Rasa Malaysia said…
The castle is a tourist attraction right? I have never been though, but looks like an exotic place.
March 09, 2009 2:53 PM

j2kfm
the sotong is a must

RM
efforts are still being made to continue the building completion to Mr Kellies original architectural plans , and to complete the secret under the river tunnel ...to reach the treasure, and untold wealth , at last !
Yes a must visit place !
March 10, 2009 8:09 AM

backStreetGluttons said…
cumiciki
this lonesome part for fishing one , hole no 19 1/2 , also for dusk and dawn use inbetween long night use