Finally, after incessant nagging and (pleasure) from the delectable Ms L, the ever accomodating BSC team was summoned to put to rest the answer to the unavoidable question :

.... who in the Klang Valley can lay claim as the undisputed one worthy to stand beside the praying mantis Prawn Mee King of Jln Macalister, Penang?

Braving through horrendous traffic jams, rude drivers, the rain and lack of clear directions, the roving gluttons after much deliberation, tension and suspense ( + enjoyment ) filed the result of this clash of the titanic prawns : 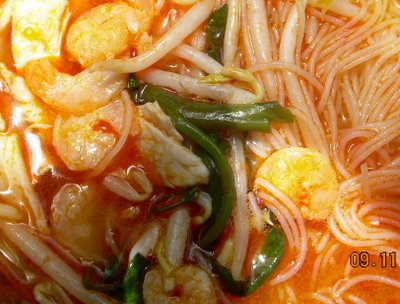 ambience like in Beach Street Pg, noisy, crowded and hot 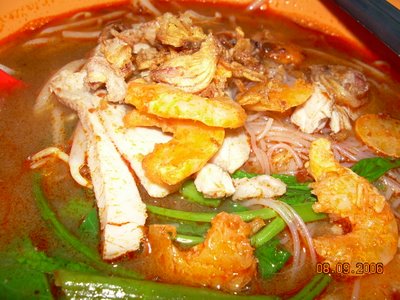 accuracy chou pu toeerr ( so so ) 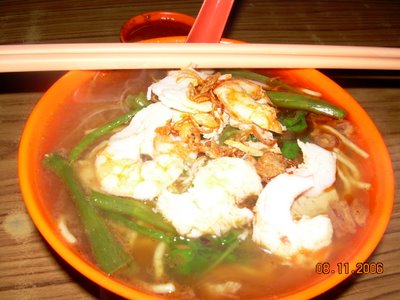 Contender 1 has been slightly wounded

Along the sidelines near the Saloon where the Honourable Judges ( Ace 118 & Co ) are seated;

Anonymous said…
ah ya i like that prawn mee in macalister road with its praying mantis.

i haven't try prawn mee in kl before!

thanks for dropping in my blog. from the link, i came here and was surprise to find your blog is a food blog. i love it and will be dropping in often.
November 12, 2006 2:04 AM

backStreetGluttons said…
wenn
maybe u could let us know how's the prawn mee over there !

ace 118
the hoo kee yee is a little too sweet 4 my liking, but their uniformed staff looks impressive !

lucia
welcome aboard and u should try
the O&S in Paramount Gardens, PJ if you r here

RM
thanks for your OK, now I can proceed to other Pg dishes !

lulu
u r absolutely right, that Champs place I avoid, even tho I frequent the one downstairs run by his bro Bernard who serve excellent Penang fare too

PabloPabla said…
I think Yong Len's prawn mee is quite good though the soup can be a tad too sweet. Kepong quite good but too many ka liu (add this and that).
November 14, 2006 5:19 PM

pahblopabla
try the Champs version if u r around Bandar Utama, with their humongous bowl !