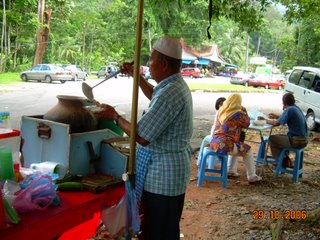 While waiting for the Land Rover to take us up to Bukit Larut, Taiping ( land of Everlasting Peace, and Malaysia's best zoo, oldest Museum and Golf Course ) we decided to try the nearest stall run by an oldish ( & authentic looking ) Pak Chik under a big shady tree beside a stream at the foothills selling Laksa Melayu, the equivalent of Assam Laksa. I simply love his century old steaming brown magic pot. And also with a view of black gibbons chattering away in the dense forests nearby. 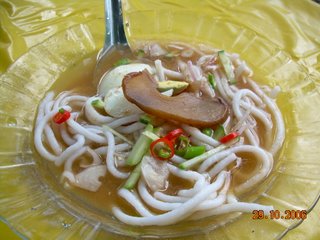 Just some onions, cucumbers and chili slices & a half egg in a mild looking brownish gravy, this is the standard Malay Laksa served by the one-man stall. Tasted surprisingly ok. I actually have friends who prefer this type of not so sour laksa over the more established Penang Assam Laksa as found in many food courts.
The Pak Chik's laksa cost RM2 a plate. Not cheap considering that my next table 4 gentlemen who between them walloped 6 plates paid RM10 and got back RM1 as balance ( ? ) ; and the Mak Chik a few trees down the road only charged RM1.70 per bowl, and that with more noodles and even more taste !

J said…
Looking at that type of laksa brings back memories! - used to eat it a lot when I was in primary school.
:)