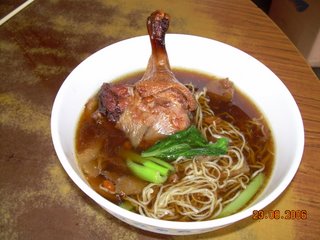 Most KLites only come to know of Bidor by accident when they are on their way to Pangkor or Cameron Highlands.

Bidor is an almost forgotten small town along the
federal route ( old road ) to Ipoh, but thanks to its chicken biscuits, petai and the ugly seedless guavas ( & Camerons n Pangkor ) it has managed to cling on to the occasional bargain hunters and hungry passers by to keep it from becoming another route 66, ( remember Slim River ? )

It is however most remembered for its unique herbal duck soup noodles, of the brownish kind. ( The popular ONE in Lucky Gardens Bangsar has its clear soup meesuah version).

The one described here ( check out the shop with more people ) is claimed to have been marinated in a secret receipe for at least 12 hours before being steamed. While the noodle is ordinary, the piping hot soup is one of a kind ( totally unlike chicken lah ) and tastes heavily delicious and strong and is also claimed to provide abundant energy ( chi ) to protect you from the cold (those of u cannot tahan one ) of Camerons as you continue your journey up the highlands.

At 5.70 ringgit per bowl it is not exactly cheap but hey don't think you can find one as good in KL ! 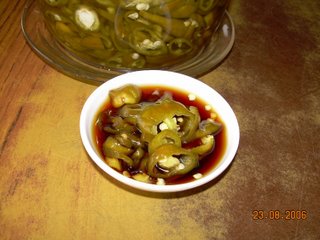 add this, for xtra oookph!!